The liquid argon Forward Calorimeter(FCAL) is designed to detect hadron jets at angles from 1 to 5 degrees relative to the proton beams,and must be able to withstand intense radiation. For this reason, a metal matrix of radiation-hard hollow copper tubes is used rather than metal plates as in the HEC. Metal rods of 4.5 mm diameter are centered in the 5 mm diameter tubes, and argon fills the small gaps between the rod and the tube wall. When hadrons traverse the copper tubing, they produce a hadronic shower that produces lower energy hadrons and knocks off protons and neutrons from the nuclei of some of the copper atoms, which leave a trail of electron-ion pairs along their path in the argon. The electric potential between the rod and the tube causes the ions produced to drift to the positive rod, creating a detectable current. 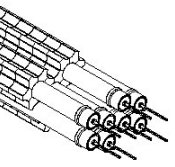 An FCAL module essentially consists of two precision drilled copper plates, with the ends of copper tubes swaged into the holes in these plates. Each tube contains a tungsten electrode rod. With ~ 10,000 tubes arranged in a hexagonal pattern, this structure provides the mechanical integrity of the device. The tungsten absorber matrix between the copper tubes is not part of the load bearing structure. 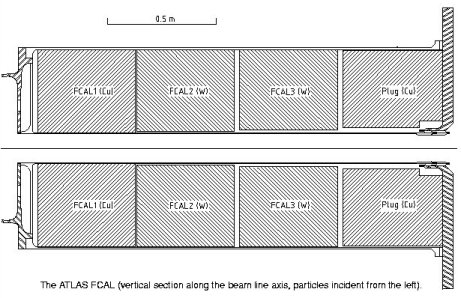 In December of 1997 the design of the FCAL was reviewed at a CERN Engineering Design Review. After the approval of the engineering design, the focus of the hadronic Forward Calorimeter group moved on to the construction and beam testing of individual components of the module-0, the design and production of the necessary tooling, and the preparation of the construction clean room at the University of Toronto. The design and production of the module components and tooling was a collaboration between Carleton University-C.R.P.P. and the University of Toronto. The module-0 was completed and shipped to CERN on the 14th of May 1998. The test beam running was successfully completed in June and July.