University of Toronto: Position Monitoring and Alignment of Pixel System

The sensors closest to the collision point are the pixel detectors. These devices consist of thin layers of silicon subdivided into rectangular regions ("pixels") of dimensions 50 by 300 microns (1 micron is 1/10,000th of a centimeter, and there are 25 microns in 1/1000th of an inch). The ATLAS detector will have approximately 140 million of these tiny pixel sensors. Closer to the collision, pixels are placed cylindrically, whereas they are located on disks further away. Each time a charged particle traverses such a layer, a signal is produced that identifies which pixel has been traversed, and thereby gives a precise measure of particle position. Indeed this position is precise enough to determine whether the particle originated at the proton-proton collision point, or a few millimeters from it as a decay product of another particle. 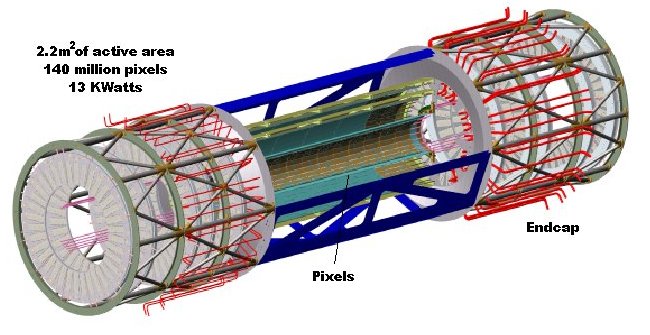